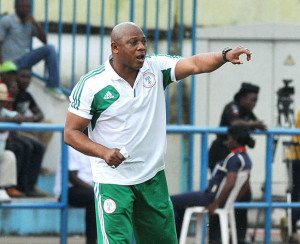 The Nigeria Sports Minister, Bolaji Abdullahi thinks they will not force Stephen Keshi to have a foreign assistant if the does not desire.
The Super Eagles coach who just registered his name in the African football annals by achieve a never previously attained feat by qualifying Nigeria to World Cup Brazil 2014 after having earlier qualified Adebayor and co of Togo to World Cup Germany 2006.
He then becomes the first African manager to qualify two teams for World Cup. Moreover, by qualifying the Super Eagles for the mass competition, Nigeria becomes the first African nation to achieve the double African champion+ World Cup qualification the same year.
There have been some suggestions in recent days of a foreign coach to assist champion Stephen Keshi ahead of their World Cup participation.
But Abdullahi released that imposing an assistant on Keshi would be an unacceptable abuse he does not deserve after his outstanding performance.
“If Keshi who we believe has done a very good job feels he needs additional technical support, we are going to give it to him,” Abdullahi told State House correspondents after briefing the Federal Executive Council on the recent success of the national football teams.

“But we are confident he is capable of doing the job. We have confidence in his ability to lead the team to the World Cup.”