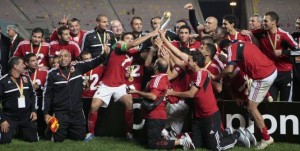 Well done to Al Ahly. The Egyptians won their seventh CAF Champions League title after they defeated Esperance 3-2 on aggregate on Saturday in Tunis. Ahly, who forced a 1-1 draw in the first leg final in Alexandria a fortnight ago, beat hosts Esperance 2-1 in the return leg game.

Mohamed Nagy ‘Geddo’ gave the Egyptian giants the lead after 43 minutes, before Waleed Soliman doubled their advantage with an individual effort on 61 minutes.

Cameroon striker Yannick Ndjeng pulled a goal back for Esperance six minutes from full time when he tapped home a pass from the right flank beyond Sherif Ekramy in goal for Ahly.

The legendary Mohamed Aboutrika had a chance to increase Ahly’s advantage in stoppage time after Mauritania striker Dominique da Silva was dangerously tackled by Esperance goalkeeper Moez Ben Charifia inside the vital area.

However, Ben Charifia atoned for his blunder by tipping Aboutrika’s effort for a corner.  Ahly dominated play from the opening minutes as Esperance preferred to sit back in their defence, probably defending their away goal from the first final in Alexandria a fortnight ago.

The perennial Egyptian champions piled pressure on their hosts and it needed goalkeeper Ben Charifia to make at least two saves to ensure the home team were not trailing by the half hour mark. Ndjeng and Youssef Msakni, who passed a late fitness test after he recently underwent an appendicitis operation, threatened Ahly’s goal only twice as Esperance played the first half mostly back in their own half.

It was therefore not until the 43rd minute that Ahly took a deserved lead when goal scorer from the first clash Hamdy Al Sayed drove down the right flank before he pulled back for Mohamed Nagy ‘Gedo’ to slot past Ben Charifia.

Esperance played a more attacking game on the resumption of play only for Ahly to double their lead in the 61st minute when Soliman scooped the ball off an Esperance defender before he fired past the goalkeeper. Ndjeng will pull a goal back late on, but it was too little, too late for the defending champions to keep their crown. Ahly will besides pocketing a cash prize of $1.5 million represent Africa in next month’s FIFA Club World Cup.