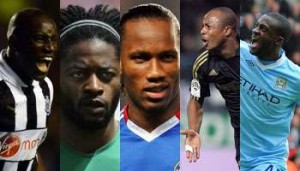 Caf initially named 34 players who they were considering for the award before cutting that down to 10 names.

The final nominees were decided by votes from the head coaches and technical directors of the football associations affiliated to Caf.

Four of the nominees have caught the judges’ attention while playing in England.

Toure has had another tremendous season with City, helping them to win the Premier League title – the first league championship for the club in 44 years.

Drogba crowned his time at Chelsea by scoring the winning penalty in the Champions League final, before he left to join Chinese club Shanghai Shenhua.

Senegal striker Demba Ba is another on the list recognised for his work in the English Premier League. He scored 17 goals for Newcastle to end last season as the club’s top scorer.

And Cameroon’s Song spent the first half of the year at Arsenal, where he was the driving force of their midfield, before leaving to join Spanish giants Barcelona.

Ghanaian Ayew has been included for his excellent performances for French Ligue 1 club Marseille.

Caf also announced the shortlist of three nominees for the Africa-based Player of the Year award.

They are Egypt and Al Ahly midfielder Mohamed Aboutrika and Zambian duo Rainford Kalaba and Stoppila Sunzu who both play for DR Congo’s TP Mazembe.

The African Footballer of the Year award is predominantly won by players based outside Africa while the African Player of the Year prize is dedicated to players plying their trade within Africa.

Both shortlists were unveiled at a ceremony in the Ghanaian capital, Accra, attended by Caf executive committee member Kwesi Nyantakyi.

The awards, which also include Coach of the Year and Club of the Year will be announced at a ceremony on 20 December in Accra.