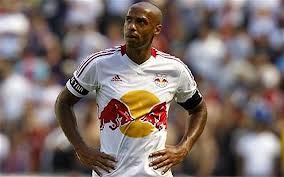 Gunners boss, Wenger, wants to bring in another striker in January as he will lose Marouane Chamakh and Gervinho to the African Cup of Nations, he has already had his scouts draw up a list of potential targets from Spain and Germany but if they cannot clinch a deal they will look to Henry.

The Arsenal boss has confirmed he is interested in signing 35-year-old Henry for a third time when the transfer window reopens.

A close friend of Henry has told Sunday Mirror Sport the striker would find it impossible to resist the lure of his spiritual home, should New York Red Bulls accept the proposal.

Henry, who spent six weeks on loan at Arsenal last season – scoring the the FA Cup and Premier League – has already trained with the club since Red Bulls’ MLS season finished with defeat by DC United on November 9.

Having seen his side draw a blank at Aston Villa Arsene Wenger may be even more keen on offering Thierry Henry a short-term deal to help beef up his attack, though one would imagine the Gunners boss has his eyes set on more permanent solutions to his lack of striking alternatives.

Originally from Guadeloupe, the 35 year old made an instant impact in his previous loan return to North London, scoring within ten minutes of coming on as sub against Leeds United and adding a Premier League winner against Sunderland and arguably the French striker may be of even more use this time around as he has had a strong season with the New York Red Bulls this term.

Henry has scored 15 and provided 12 assists in 25 appearances during the current campaign and if he proves himself to be physically fit enough to warrant a spot in Wenger’s squad then his instinctive abilities in front of goal may well be called upon as Arsenal look to move onwards and upwards in pursuit of an end to a long silverware drought.

Wenger sold Robin Van Persie and Carlos Vela to Man United and Real Sociedad respectively and then further diminished his attacking options by opting to loan out Nicklas Bendtner, Park Chu-Young and youngster Joel Campbell to Juventus, Celta Vigo and Real Betis and is now beginning to feel the paucity of options in this role still available in his first team squad.

The Frenchman now plans to go on holiday before coming back to London in December, where he is set to make full use of Arsenal’s training facilities on his return to maintain his fitness.

Speaking in the summer about the possibility of another stint at Arsenal, Henry said: “I would like to go back to England with Arsenal for sure.”

Olivier Giroud enlightened RTL on the situation, “Henry has been training with the squad but he told me he didn’t know if he’s going to join us on loan this winter,”