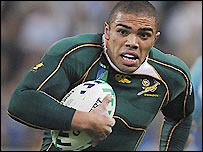 National selection:
-November 2004: He began with the Springboks against the England team.
Palmares:
In Clubs:
-2007: He was awarded the World best player of the year by the International Rugby Board (IRB) and also champion of Super 14
-2006: Winner of the Currie Cup with the Free State Cheetahs
In the national team:
-2007: The World champion with South Africa
-2009: Winner of the Tri-nations 2009