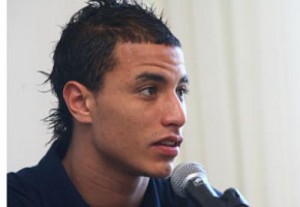 Marouane Chamakh was born on January 10, 1984 in Tonneins in France.He plays for Bordeaux as a forward specifically at Centre Forward position in the top level of soccer league in France called Ligue 1. Marouane Chamakh wears shirt number 29 for Bordeaux.
Career:
He was known to the Girondins of Bordeaux while he was doing well at FC Marmande 47 with the beneath 15 years old . At 16, he accepted to join the training centre of the Girondins while continuing his studies. He got his professional A Level as an accountant. He also signed in the English prestigious club of Arsenal. At 19, he played his first professional match with Bordeaux during the League Cup match against FC Metz on January 19, 2003. In May 2010, he signed in Arsenal. Arsène Wenger said: “He is a player, we have been admiring since a give time and I believe that he is going to prove good in the team.”
National selection:
-2003, Marouane got once selected to the Fench national team of the lesser than 19.
-2003: He got the nationality of his native country, Morocco.
-2004: Finalist of the African Cup of Nations
Palmares:
With Girondins of Bordeaux :
-French champion in 2009
-Winner of the League Cup in 2007 and 2009
-Finalist of the League Cup in 2010
-Winner of the Champions Trophee in 2008 and 2009
With Arsenal:
-Finalist of the League Cup in 2011
With the selection:
Finalist of the African Cup of Nations in 2004
Personal qualifications:
-The best Moroccan footballer of the years 2004 and 2009
-The best Moroccan footballer abroad in 2007