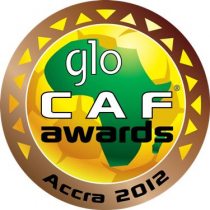 The Confederation of African Football has released the nominees for the rest of the categories for this year’s GLO-CAF Awards scheduled for the 20th of December in Accra, Ghana.

In the National Team of the Year category, reigning African champions Zambia have been nominated along with the team Chipolopolo beat in 2012 AFCON final, Ivory Coast. 2013 AFCON debutants Cape Verde are also in the running as is Central African Republic.

In the Women’s National Team of the Year, recently crowned African Women’s Champions, Equatorial Guinea will fight it out with Ghana’s U-17 side that finished third in this year’s FIFA World Cup and Nigeria’s Super Falcons for the honours.

CAF will announce the top three nominees each category of the Year and by late December after the voting by CAF relevant Standing Committees, namely the Media, Technical and Football committees.