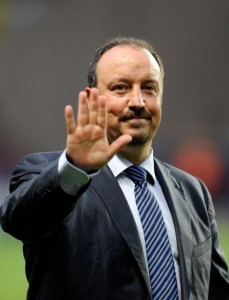 Chelsea boss Rafael Benitez has refused to issue an apology to the club’s supporters for comments he made during his time in charge of Liverpool.

The Spaniard was booed by a section of Blues fans during his first game in charge against Manchester City on Sunday, with some holding up banners venting their frustrations at his appointment and Roberto Di Matteo’s sacking.

While in charge of Liverpool, Benitez – who insisted he would never work for the Stamford Bridge side – made negative remarks about Chelsea supporters and the club’s decision to hand out ‘plastic flags’.

And when quizzed if he was prepared to apologise for his previous remarks, Benitez responded by telling reporters: “The problem is that we cannot analyse what I did or did not say. “We cannot really check. I will show them that I can try my best.”

The 52-year-old likened his situation to that of a new player arriving at a club, and said he is keen to focus on improving his new squad and starting to win matches again.

He added: “Imagine that you have a player that has no support from fans. What I will tell him is, ‘Listen, stay focused work for your club, don’t be distracted, concentrate on football.’ I understand. I know about the fans. “But at the same time I will try to prove that I am here for the right reasons, that I am here to win. I will concentrate on my coaching, to improve players, and to win.”

Chelsea host local rivals Fulham in the Premier League on Wednesday looking to end a recent slump which has seen them drop to third spot behind Manchester United and City.