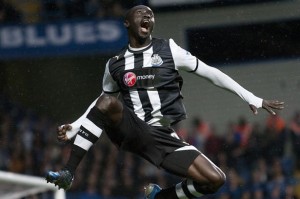 Newcastle is not currently doing well. The English club of the two Senegalese Demba Ba and Papiss Cissé did not score a single goal since three matches.

The Magpies encountered Stoke City last Wednesday during a shifted day in the Premier League.
For one more time, the club of Alan Pardew failed (1-2). However the striker of Lion de la Teranga opened the goal for is team at 47th minute.
He yielded his place later at the end of the first half-time.
His teammate Demba Ba, has finish the encounter as well as the Ivorian Cheick  Tioté.

Here are the goals scored by the Senegalese during the last season.