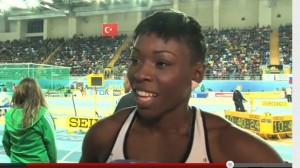 Murielle Ahouré was born on August 23, 1987 in Abidjan in Ivory coast. She is an Ivorian athletic specialized in the 100 and 200 metres. She is as tall as 1.7 and weighs 57 kg.
Her father is a general in the Ivorian army.