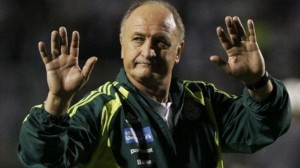 Last Tuesday, the Brazilian Federation confirmed the 64-years-old technician.
He left his last trained club, Palmeiras in September. The former coach of the Auriverde is succeeding Mano Menezes sacked last Friday.
The world champion of the year 2002 with the generation of Ronaldo has another challenge to face. He has to win a trophee at home in 2014.
Brazil is five times World Champion in 1958, 1962, 1970, 1994 and 2002.