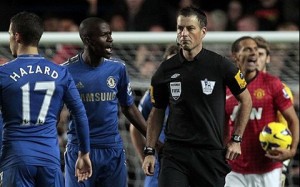 Referees’ union Prospect says it considers the statement issued by Chelsea regretting its allegations of racial abuse against match official Mark Clattenburg ‘as an apology’.

In a joint statement with referees’ body Professional Game Match Officials Limited (PGMOL) and the Premier League, the European champions regretted ‘not having given more consideration before issuing a statement’ on 28 October accusing the referee or racism.

This followed a decision by police earlier this month to end their inquiries into the incident because of a lack of evidence.

“The use of the word “regrets” in relation to the swift issue of the club’s statement publicizing the allegation … and in relation to the impact on Mark and his family, were tantamount to and accepted by Mark and the group as an apology’,” said Prospect in a statement.

The union also revealed that it has now dropped its demand for Chelsea to pay compensation in light of the statement released on Tuesday.

“The club regrets not having given more consideration before issuing a statement on the evening of Sunday 28th October,” it read.

“The club also regrets the subsequent impact the intense media scrutiny had on Mark Clattenburg and his family.

“The referees accept that, given Chelsea FC had received a good faith claim from one of their employees, the club had an obligation under FA rules to report the allegation.

“Chelsea FC made it clear they would welcome Mark Clattenburg back to Stamford Bridge in the future and PGMOL would have no issue in appointing him to a Chelsea FC match going forward.

“All parties now believe it is time to draw a line under this incident, learn from it and move on for the good of all Premier League clubs, players and match officials.”

The accusations arose after Chelsea midfielder Ramires claimed that the referee, who missed four weekends of Premier League matches while the FA investigated the allegations, had used racial language towards Mikel.

After being cleared by the FA last week, Clattenburg issued a statement of his own, saying: “To know you were innocent of something but that there was the opportunity for it to wreck your career was truly frightening.”

On Wednesday, the referee will take charge of Southampton against Norwich City as Clattenburg returns to officiating a Premier League game for the first time since the allegations arose.