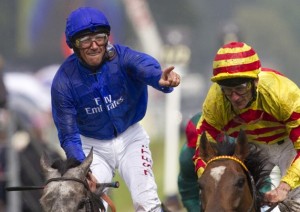 Top jockey Frankie Dettori was handed a temporary ban from riding in France Wednesday after giving a positive drugs test for a banned substance.

The suspension was imposed on “medical grounds” by French racing’s ruling body, France Galop, who said they would deliver their full verdict “within the next fortnight.”

Italian-born, Dettori failed the doping control after a meeting at the famous Longchamps race course in Paris on September 16.

“Following yesterday’s examination of the file and after having duly notified the jockey Lanfranco Dettori of its decision, the Medical Committee has temporarily suspended the said jockey from riding in races in France, based on medical grounds,” read a statement released by France Galop.

The 41-year-old Dettori is one of the most recognizable figures in flat racing, winning the champion jockey’s title three times in England.

He is most famous for going through the card at Ascot in a meeting in 1996 with seven straight winners.

His lawyer has said that the substance involved, which has not been disclosed, was not performance enhancing.

Dettori could escape without further punishment or face a maximum six-month worldwide ban from racing.

Last month, Dettori’s 18-year association with the Godolphin stable came to an end and he planned to ride next year as an unattached jockey.

He had four rides at the meeting on September 16, two for Dubai-owned Godolphin, without securing a winner.