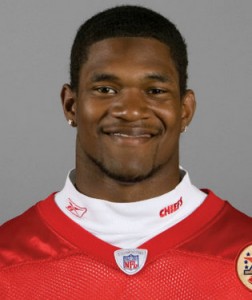 Jovan Belcher, 25, had been a success story, an underdog done good. An undrafted free agent from the fringes of the college football universe, he not only made the Kansas City Chiefs’ roster, he made his mark, playing every game since 2009, rising from special teams ace to starter, recording more and more tackles each season, and winning over teammates and fans along the way.

On Saturday, it all came to a bloody end.

“I am devastated and heart broken,” wrote Jeff Allen, one of several Kansas City players who took to Twitter to express their grief and astonishment. “I’m sending prayers to everyone involved. Always show love and never be afraid to talk.”

The first sign of trouble came around 7:50 a.m. (8:50 a.m. ET), when police in Kansas City, Missouri, got a call about a shooting. When officers arrived outside a split-level home in a middle-class neighborhood, a woman came out and told them a younger woman later identified as 22-year-old Kasandra Perkins, –“had been shot by her boyfriend several times,” said police spokesman Darin Snapp.

About 20 minutes later, another call came into police. This one was from Arrowhead Stadium, the Chiefs’ home, about “a person who was in the parking lot, armed with a handgun.”

Officers sped over and noticed a black man, talking to several coaches, and holding a gun to his head, Snapp said.

“As the officers pulled up and began to park, that’s when they heard the gunshot.”

The bullet went into Belcher’s head, killing him.

The police spokesman initial didn’t specify whom the linebacker was talking to before he fired that fatal shot. The league’s website, NFL.com, reported one of them was the team’s head coach, Romeo Crennel. Kansas City Mayor Sly James added that general manager Scott Pioli also witnessed the suicide.

“He knows all the players, he knows that particular player,” James said of Pioli. “He’s very emotional about this.”

What was known about Belcher, prior to Saturday’s apparent murder-suicide, was that he came from Long Island, New York. He was a football standout and especially a star in the sport of wrestling, earning All-America honors in three of his four years at West Babylon High School.

Belcher’s next stop was the University of Maine. The school in Orono, in central Maine, is far from a college football hotbed. The Black Bears play in the Football Championship Subdivision, in the college sport’s second tier.

In these remote environs, the New York product started every game in four years before graduating with a degree in child development. Some projected him as a late-round pick entering the 2009 draft.

That didn’t happen. He did catch on with Kansas City as a free agent, though with no guarantees. But the 6-foot-2, 228-pound Belcher soon made an impression, leading the Chiefs with 17 special-teams tackles his rookie year. Over time, No. 59 emerged as a defense stalwart, starting 44 of the 59 games he played, including each one last season.

“One of everyone’s favorite teammates including one of mine, Tony Moeaki remarked on Twitter after the news broke Saturday. “Great great great teammate.”

Few, if any, know exactly why and how Belcher’s story ended. But Snapp, the police spokesman, did offer clues.

Prior to Saturday, Belcher’s name had never come up with police, nor had officers ever been called to the residence where the first shooting occurred. But later they learned the football player and his late girlfriend “had been arguing,” including “before the shooting occurred,” said Snapp.

Police arrived Saturday morning to find Perkins, who is originally from Texas, gravely wounded. Snapp said she was transported to a nearby hospital and “died a short time later.”

Sometime after that, Belcher drove about five miles northwest, to Arrowhead Stadium. He was armed, but never pointed the gun at anyone else — instead thanking coaches for what they’d done for him, officials told CNN affiliate KCTV.

“The coaches said when he pulled up, they were never in danger. He never threatened them or anything,” Snapp said.

“He talked for a little bit, and then he shot himself.”

That gunshot ended Saturday’s saga. It left the baby — who was inside the Kansas City home, but in another room, when her mother was shot — without a surviving parent, and she is now with relatives, Snapp said.

The area around the stadium and the Chiefs’ abutting practice facility shut down for about an hour after the second shooting.

But it should be packed Sunday afternoon. The Chiefs, who were struggling mightily before this and sported a 1-10 record, will play the Carolina Panthers, as scheduled, the NFL announced.

Kansas City’s mayor said Saturday he hadn’t given much thought over whether he felt the game should be canceled or go on. But he has no doubts where members of the Chiefs’ organization stand.

“They think there should be a game tomorrow,” James said. “I think that they believe there is an obligation to the people of this city, the fans of the team, the fans of the other team to proceed and go forward.”