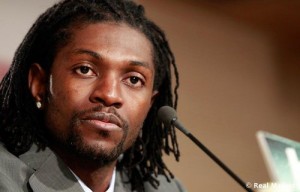 Tottenham striker Emmanuel Adebayor won’t participate in the 2013 Africa Cup of Nations after he suspended his international career with Togo.

The Sparrow Hawks captain released a statement in which he announced that he would quit the national team, after the Togo football federation failed to pay out match bonuses after a friendly against Morroco last month.

The statement, which was released by Adebayor’s public relations officer Amedodji Blaise, read: “Togo international and captain of the Sparrow Hawks Emmanuel Sheyi Adebayor hereby brings to the notice of the general public that he is suspending his international career with Togo team.

“The atmosphere currently prevailing within the Hawks will not help the team achieve its set out objectives.”

The Togolese skipper had threatened last week to pull out of the team after he accused authorities of non payment of their match bonuses for the Morocco friendly.

Authorities of the Federation have since denied responsibility claiming the proceeds from the game were used to pay players’ flight tickets, hotel bills and miscellaneous.

This is the second time the 28-year old is backing out of the squad after previously do so in 2010 when the Togolese bus was attacked by gun men in the Angolan border prior to the Afcon. Adebayor later returned to help the team qualify for the 2013 Afcon sealing qualification over Gabon.

Togo secured qualification for the continental championship in South Africa after edging out Gabon in the final qualifying round in October.