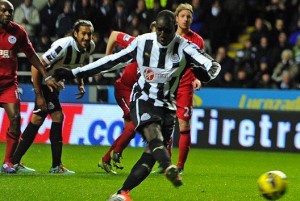 Let’s go back on this match between Newcastle and Wigan. Monday night, Demba Ba’s double in Newcastle’s 3-0 win over Wigan allowed him to catch up.

Two-goals up at half-time against 10 men and cruising to victory, the message from Alan Pardew was clear. Any niggles, strains or pulls and you’re coming off.

And so, against his normal judgement, Cheick Tiote put his hand up for the hook at half-time to preserve his weary limbs, and when Davide Santon and Jonas Gutierrez felt twinges and knocks, they made the sign to the physios and missed parts of the second half, too.

Ba has yet to be persuaded to sign a new deal which will bury the £7.5million release clause contained in his initial contract from summer 2011.

Newcastle have been locked in negotiations with Ba’s representatives for some time, but there is understood to be a significant gap between the wage deal the club are prepared to offer and Ba’s demands.

Here below the video of his two goals :