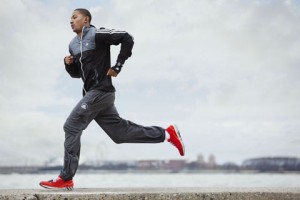 Chicago Bulls point guard Derrick Rose has added short sprints to the list of things he’s accomplished in rehab on his road back to the floor. The 24-year-old point guard started cutting again on his surgically repaired left knee a few weeks ago and was sprinting in bursts after practice on Monday afternoon.

“I think he looks really good,” Bulls center Joakim Noah said at a charity event for his Noah’s Arc Foundation later in the day. “He looks great, actually.”

Rose tore the ACL in his left knee during the first game of the Eastern Conference playoffs against the Philadelphia 76ers on April 28. He had surgery on May 12 and was expected to be out eight to 12 months. Aside from a major advertising campaign from adidas, Rose has stayed out of the public eye by design.

He hasn’t traveled much with the Bulls this season and has not formally spoken with reporters since media day early in October. Noah admitted that like many of his teammates there are still times when he looks on the floor and still can’t believe his close friend and teammate isn’t out there with him.

“Of course,” Noah said. “I think everybody does. But at the same time it’s also knowing that if we keep working individually, as a whole, we’ll be better for the long run. It’s always about looking at the big picture. There’s a lot of basketball to be played and the exciting thing about it is he’ll be back.”

Even without Rose on the floor, Noah is in the midst of a career season averaging 13 points, 10 rebounds and four assists a game in close to 40 minutes a night. While it’s been strange for him to play without Rose, he is motivated by seeing his friend’s recent workouts because he realizes Rose will be back in the near future.

“I think that this season there’s been highs and lows,” Noah said. “First of all, it’s been different playing without Derrick, but it also makes you (realize) … what I love about playing with Derrick is I feel like it’s always more than basketball. Just him being from Chicago, it gives me more motivation and if things go well I feel like he’ll be back and that’s exciting. But right now we’re trying to hold the fort down and we’re playing as hard as we can every night. Win or lose I feel like we’re giving everything we got and I think if we keep doing that we’re going to have success.”

Like most within the Bulls’ organization, Noah has no doubt that Rose will eventually come back to being the player he was before the injury.