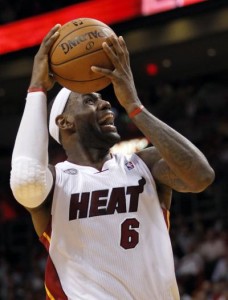 When LeBron James learned he was Sports Illustrated’s Sportsman of the Year, the Miami Heat star was surprised.

Not because he thought his achievements in 2012 weren’t worthy, but because he figured what happened in 2010 was still holding him back.

Apparently, that’s no longer the case. The magazine announced its annual choice Monday, with James becoming the first NBA player to win the award since Heat teammate Dwyane Wade in 2006.

“I remember just like yesterday when I signed here and basically, like the roof caved in,” James told The Associated Press, referring to the fallout from his infamous “Decision” to leave Cleveland for Miami in 2010. “To see that I and my team and everyone around me was able to patch that roof up, to come to this point, to come to this point and receive such a prestigious award, it’s huge.”

Time Inc. Sports Group editor Paul Fichtenbaum said one thing separating James this year was that when Miami needed him most “he came up the biggest.” In particular, Game 4 of the second-round series at Indiana and Game 6 of the Eastern Conference finals at Boston.

“LeBron kind of made it easy on us,” Fichtenbaum said. “In a year that had really high standards, he just stood taller than everybody else.”

James won essentially all he could win in 2012: He became an NBA champion for the first time, won the NBA Finals MVP trophy, helped the U.S. win Olympic gold for the second time and picked up his third NBA MVP award.

Fichtenbaum said James was the choice not only for his play but also because of his charitable work, especially involving schoolchildren in his native Akron, Ohio.

“I do think there has been some sort of closure  maybe not entirely in Cleveland, but across the nation,” Fichtenbaum said. “LeBron’s jerseys are now the No. 1-selling jerseys. I think there’s a reason for that. I think people really appreciate him for everything he can do.”

This is the 18th time James will be on SI’s cover, the magazine said. His first time was as a high school junior in February 2002, when the magazine famously dubbed him “The Chosen One” and touted how he would have been an NBA lottery pick even then.

The first 17 covers were different: Only this one has James wearing an NBA championship ring.

“Do I need it? I don’t need it,” James said. “I don’t ever look for individual accolades. I do what I do because I love it and I want to continue to get better at it.”

The Dec. 10 issue of SI is out Wednesday, the same day James will be honored at the magazine’s Sportsman of the Year awards gala in New York.