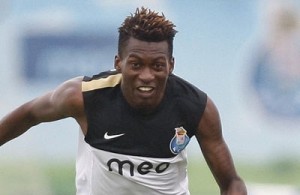 Wolfsburg and Frankfort are running after the Ghanaian defender David Addy.

According to the Portuguese journal A Bola, the left lateral of the Black Stars could sooner join the Bundesliga (German Championship) if an offer from one of  the two teams is sent to his actual leaders.

Addy is actually doing well in the Portuguese Super Liga with Victoria Guimaraes. A club he joined only this season with a contract leading to 2014.

The 2009 junior world champion came from Porto where he did not happen to be imperative in the eleven holders.

Because of this, he has been borrowed to Academica Coimbra and later to the Grecs de Panetolikos.

Actually, Addy is fighting for a reservation within the 23 Black Stars for Afcon 2013.