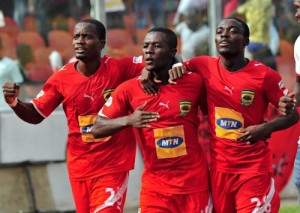 He said since the team was determined to halt the chain of draws they have been recording, there was absolutely no need for anybody to panic..

Sumaila, who was easily adjudged man of the match in Sunday’s league clash for his awesome performance at the back, argued that although the emerging trend was not too good, the performance of the team was satisfactory enough to bring victory when they start scoring.

“Our desire has been to win any time we go onto the pitch. We fight hard but the win does not come. We are not content with that. We have to continue working on our performance. Surely we will win” said the defender. Rashid added that, in the face of the increasingly fine performance of the team, it will be wrong and unfair for their supporters to lose hope.

“Our supporters do not have to lose confidence. They must trust us to deliver. We are doing our best. Wherever things have gone wrong, we promise to make amends” said the defender.

Rashid Sumaila’s strength and confidence on the ball coupled with his perfect tackles and distributions, left even the opposing fans at the stadium so delighted. They applauded his outstanding display throughout the game and being a former player of Ebusua Dwarfs, some Kotoko fans had expected that he would receive a hostile reception.

That was however not the case. Reacting to the nice reception given to him before, during and after the game, Rashid Sumaila said it was his desire to excel for both Kotoko and Dwarfs supporters to be convinced that he has great quality.

“I wanted everybody to know my quality. I needed to show that I am still a good player. I was therefore unprepared to lose guard at the back” he said. He promised a lot more exciting performances to show. “Although we have played ten matches, I think it is still early days yet. I have more to deliver. I want Kotoko supporters and the entire country to follow the league well and see how things will go for us” said Sumaila.