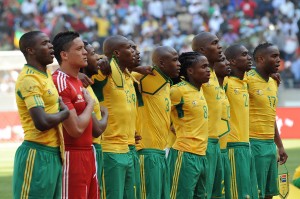 South Africa is going to play three friendly matches before Afcon 2013 in January.

This was announced by the South African coach, Gordon Igesund, at the press this Tuesday.

The first encounter is going to be on December 22 in Durban against Malawi.
“It is important for us to play a match before that against Norway on January 8 in Cape Town. It will be useful to observe other players in order to better select the 23 players for the competition”, explained Igesund to justify the friendly match.
A last match planned on January 12 against Algeria will conclude the Bafana Bafana’s preparations to Afcon.
South Africa begins its Afcon on January 19 against Cape Verde. Morocco and Algeria are the other adversaries of the hosting country in group A.