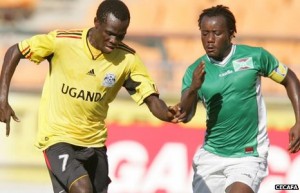 Uganda, Kenya, Tanzania and Zanzibar have composted their tickets for the semi-finals of the Cecafa Cup which takes place in Uganda.

The quarterfinals have been played on  Monday and Tuesday.

Rwanda, which had yet finished as first in his qualifying group d to Tanzania (0-2), led by John Bocco Adebayor was also scorer. Zanzibar made a surprise by knocking Burundi out on penalties 6-5 (0-0 in regular time).

Kenya beat Malawi on the smallest of margins 1-0 to reach the semis. Uganda, the host country has blocked the road to Ethiopia 2-0.
It is not a very encouraging performance for Ethiopia who took advantage of this event to prepare for the next Afcon.
The semi-finals will be played on Thursday  between Uganda -Tanzania and Zanzibar-Kenya. The grand finale is scheduled for Saturday, December 8.