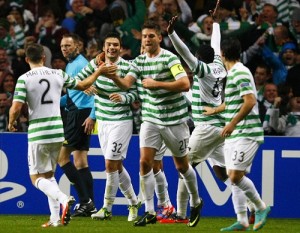 Spartak Moscow were beaten 2-1 away at Celtic to suffer their fifth defeat in six Champions League group stage matches.

­Spartak arrived in Glasgow in low spirits after losing the last of their three games with an aggregate score of 12-3.

Despite having no chance to prolong their European campaign, the Muscovites still had to prove to their last match in the current edition of the Champions League.

The stakes were a lot higher for Celtic, who were battling Benfica for the second spot and needed nothing but victory on the home pitch.

The hosts applied their traditional tactics for the match, giving the ball away to Spartak in order to wait for the opponents’ mistake.

And the Russians wasted no time in making one, with Gary Hooper putting Celtic in front on the 21st minute after Juan Insaurralde failed to clear after a simple long ball, 1-0.

Spartak equalized on the 39th minute as Emmanuel Emenike set up Ari for the goal, following an impressive solo run, 1-1.

But it was the last success of the night for the Red-and-Whites, as Celtic turned up the heat in the second half.

Georgios Samaras had a great chance to give the home side a lead soon after the restart, but his effort ended up hitting the post.

Still, it was the Greek striker who made the decisive contribution to Celtic’s win as he earned a penalty on the 82nd minute.

All Spartak could reply with was a harsh foul by Kim Kallstrom, who was sent off for the second yellow.

Barcelona, who already guaranteed themselves the first spot in the group, played a 0-0 draw against visiting Benfica to make sure Celtic progress to the playoffs.