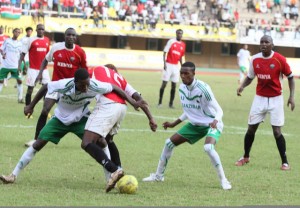 Uganda is playing on Sunday the finale of the Cecafa Cup.

It will be against Kenya.

The two teams have been respectively qualified on Thursday against Zanzibar and Tanzania during the semi finals.
The Harambee Stars have struggled hard to win their pure tickets for the finale. Kenya had to pass through penalty shootout against a surprising team of Zanzibar. After a score of 2 goals throughout at the end of the regulation time and an extra time, Kenya has become imperative with 5-2 in the penalty shootout.
Uganda did not have any problem with getting rid of Tanzania. They Inflicted a bitter score of 3-0 to the partners of John Bocco Adebayor for once impotent. Emmanuel Okwi at the 11th minute and then Robert Ssetongo thanks to a double have scored for the Cranes.
Before the big finale scheduled for Saturday, the ranking match will be between Zanzibar and Tanzania on the same day.