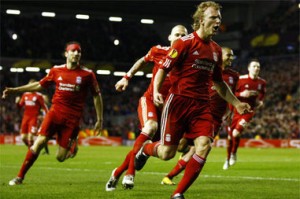 Brendan Rodgers’ side ended up topping Group A, ahead of already qualified Anzhi Makhachkala, beaten 3-1 by Young Boys with this trio all finishing the group stage on 10 points.

Two of the other five last 32 round tickets on offer in Thursday’s closing group stage action were claimed by Steaua Bucharest and Vfb Stuttgart from Group E.

Liverpool turned up in Italy with their Europa League destiny in their own hands  knowing a win would assure them of passage to the knockout stages, irrespective of the outcome of the other Group A tie between Anzhi and Young Boys.

They began boldly yet it was the already knocked-out Udinese who went close to taking the lead when Roberto Pereyra curled in an angled shot on 21 minutes.

But Liverpool keeper Pepe Reina was up to the challenge, diving back and tipping the ball to safety over the bar.
Two minutes later Liverpool took control from an unexpected source.

Stewart Downing’s corner from the left was headed on by Luis Suarez to Suso who in turn laid it back to Henderson who drilled a low ball through the Udinese defence and the legs of their keeper Daniele Padelli.

For midfielder Henderson, a £16m signing by Kenny Dalglish 18 months ago, this was his first goal of the season and his debut goal in Europe.

Liverpool almost went into the break two goals to the good only for Padelli, who had a brief loan spell at Anfield in 2007, to produce a lightning reflex save to deny Suarez’s acrobatic close range bicycle kick.

With Young Boys having taken the lead over Anzhi in Switzerland Liverpool endured a nervy second half, aware that if they conceded they would be eliminated.

Udinese eased Liverpool’s task when they went down to 10-men following a second booking for Giovanni Pasquale and the Anfield side grimly held on.

Newcastle travelled to Bordeaux with qualification already in the bag but Alan Pardew’s men missed out on denying the French side of top spot in Group D after a 2-0 defeat.

The remaining two last 32 tickets were up for grabs in Thursday’s late kick-offs, with Tottenham hoping to join their Premier League colleagues in the knockout round, Andre Villas Boas’s men having to avoid defeat to Panathinaikos to ensure their passage from Group J.

The top two teams from each of the 12 first round groups are joined by the eight Champions League castaways, featuring for the first time ever the defending European champions in Chelsea.

The Blues’ presence adds spice to a competition which UEFA is considering scrapping in favour of an extension to the Champions League format later this decade.

The two-legged last 32 round gets underway in mid-February with the draw held later this month.

Europa League results on Thursday, the sixth and final round of group matches: