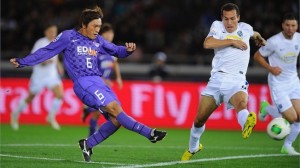 Al Ahly, the African champion knows already its adversary for the quarter finals of the 9th edition of  the FIFA Club World Cup that is being held in Japan from December 6 to 16, 2012.

Egyptians exempt from the previous round are clashing next Sunday, 9 December the Japanese of  Sanfrecce Hiroshima.

The Japanese have beaten at the opening of the tournament on Sunday the Australian team of Auckland City by 1-0.
The European representative (Chelsea) that of Southern America (Corinthians) are getting into the program only for the semi-finals.