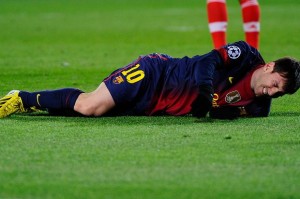 Barcelona’s Lionel Messi has escaped serious injury after being carried off on a stretcher during Wednesday’s Champions League draw with Benfica.

Messi hurt his left knee in a collision and was taken off 30 minutes after coming on as a second-half substitute.

“I sincerely thought it was the last ball I’d touch for a long time because of the pain,” the 25-year-old said.

Messi is not expected to play in Sunday’s match at Real Betis, but Barcelona have La Liga games against Atletico Madrid and Real Valladolid, and a Copa del Rey tie with Cordoba in December for him to attempt to break the record.

Watch the video below :