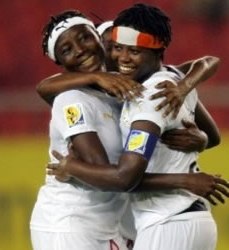 The Black Queens finished the year with 1459 points after receiving no point from the previous build up in the August rankings. The Women’s ranking is released quarterly.

On the African table, the Black Queens are third behind leaders, Nigeria and Cameroon in second place.

The biggest movers in December was the new African champions, Equatorial Guinea, jumping 8 places up 54th.

Olympic champions USA have once again comfortably held on to their lead on the back of their unbeaten run and are followed by Germany.