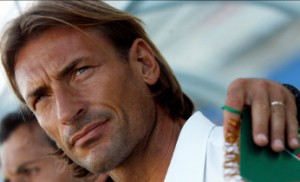 Hervé Renard is a French football manager and former professional player born on September 30, 1968 in Aix-les-Bains in France .

He is currently the head coach of Zambia national football team, with whom he won the 2012 Africa Cup of Nations, his first title as a coach.
Professional journey :
Player
1983-1990: AS Cannes
1991-1997 : Stade de Vallauris
1997-1998 : SC Draguignan
Hervé Renard played only one match of D1 which was against Matra Racing during the 1988-1989 season.
Coach :
2005-2007: Coach of AS Cherbourg (national club). He was the vice coach of the Ghanaian national team.
May 7, 2012: Coach of the Zambian national team. He led the team to the quarter-finals for the first time since 14 years.
April 8, 2011: Coach of the national team of Angola.
November 2011: He reached the top of the Zambian national team.
Palmares :
2012: Winner of the African Cup of Nations
Hervé Renard is nominated as the best African coach of the year by the 2012 Africa Top Sports Awards.