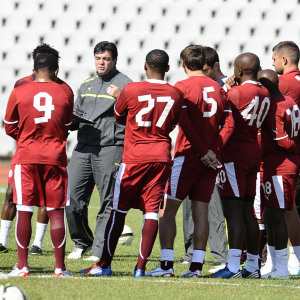 In a tale of riches to rags, Moroka Swallows and SuperSport United do battle in the PSL on Friday evening with each hoping not to get dragged deeper into a relegation dogfight.

The Dube Birds soared to new heights last season as they finished runners-up to Orlando Pirates, but that was under the leadership of Gordon Igesund, who is now heading Bafana Bafana.

His replacement, Zeca Marques, had done well enough to fill the four-time PSL title winning coach’s shoes after initially picking up the reins, but he has since been unable to halt Swallows’ downward spiral after going their last six league matches without a win, losing four and drawing two.

That has left the Soweto outfit 11th in the standings, just three points above the bottom two with almost half the season already completed.

Matsatsantsa, meanwhile, may not have won the title since 2010, but they’ve definitely been amongst the challengers over the past two seasons. This term, however, is a different story for Gavin Hunt’s side.

A look at the current league table shows just one loss for United, but it’s the draw column that will have triple PSL king Hunt scratching his head, United having finished all-square in no fewer than 11 of their opening 13 matches.

Those results have left the Tshwane giants one place above Swallows on goal-difference, and facing the real threat of a basement battle.

The two teams are in good company down there though, with supposed Premiership juggernauts Mamelodi Sundowns already fighting against the drop, sitting second-last and above rock-bottom AmaZulu by a single point.