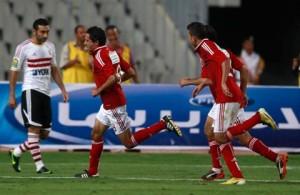 After the death of 72 fans in February, Al-Ahly hope to end year with progression into Club World Cup final.

Egypt’s Al-Ahly, scarred by the deaths of 72 fans following a stadium riot earlier this year, have targeted a spot in the Club World Cup final to end a traumatic season on a positive note.

Captain Hossam Ghaly said a dream run to the final in Yokohama on December 16 would help lift the gloom for the African champions after February’s tragedy in Port Said.

“The disaster has been very difficult for us to come to terms with,” the former Tottenham Hotspur and Feyenoord midfielder told FIFA.com.

“Seventy two of the club’s supporters lost their lives and we’ve all been badly scarred by that,” said Ghaly before Ahly’s quarter-final against Japan’s Sanfrecce Hiroshima on Sunday.

“We met all the families. We tried to lift their spirits a little but we could sense the terrible pain they were feeling. I went through a real nightmare.

“We experienced (the disaster) in the flesh and we saw several supporters die in the dressing room. To go to a football match and lose your life doesn’t bear thinking about.”

The tragedy forced the cancellation of the Egyptian Premier League but Al-Ahly went on to win a record seventh African title last month, beating Tunisia’s Esperance in the final.

Political turmoil in the country has further complicated Ahly’s Club World Cup preparations but Ghaly said the Cairo side could become only the second African team to reach the final.

“This year has been hard for the club and for Egyptian football as a whole, because of the political situation,” the 30-year-old said.

“I’d been waiting to take part in this competition since going back to Al-Ahly two years ago. I’d love to face Chelsea,
especially as it would mean we’d be in the final.

“I played against them four times in England – three times with Spurs and once with Derby County.”

Congolese club Mazembe pulled off a shock 2-0 win over Brazil’s Internacional before losing to Inter Milan in the final of the 2010 Club World Cup in Abu Dhabi.

Al-Ahly, appearing for the fourth time in the FIFA competition, would need to beat Hiroshima and South American champions Corinthians to get a shot at the title. Their best finish to date was third place in 2006.

“We won the Champions League in spite of everything,” Ghaly said.

“We’ll be going out to win every game and I hope we can do Africa and Egypt proud.”