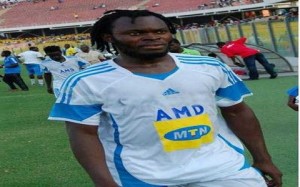 In form Amidaus Professionals Captain Yahya Mohammed says his target this season is not to win the premier league top scorers crown.

The Midfielder who is loan from Ghana premier league Champions Asante Kotoko leads the scorers chart with 9 goals as a midfielder.

“I have not targeted the goal king yet since I’m not a striker. I’m a midfielder and will continue to do my best to score more”. Said Yahya Mohammed

“If it is possible for me to win the goal king I will but it is not my target”.