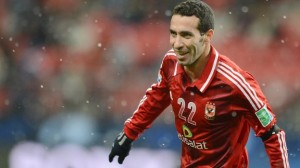 Very good news for us : African champions Al-Ahly beat Japan’s Sanfrecce Hiroshima 2-1 in blizzard-like conditions in the second quarter-final and will face Brazil’s Corinthians in the last four.

Slick-passing Monterrey dominated Asian Champions League winners Ulsan in snow-sprinkled Toyota and showed to enough to suggest they will be no pushovers for Chelsea.

“If we can play like we did today against Chelsea we will have a chance,” Monterrey coach Victor Vucetich told reporters.

Jesus Corona opened the scoring after nine minutes, finishing a superb three-man move from close range before his back-heel fell for Delgado to tap home in the 77th minute.

Delgado smashed in his second seven minutes later to kill off the game, in which Hawk-Eye’s goal-line technology was being used for the first time, although Ulsan grabbed a late consolation through Lee Keun-ho.

Ahly’s talismanic striker Mohamed Aboutrika, now in the twilight of his career, drilled home the winner 12 minutes into the second half to send the Egyptians through.

They play Brazil’s Corinthians, holders of the Libertadores Cup, in the tournament’s first semi-final on Wednesday.

“It was a very tough match,” said Al-Ahly coach Hossam El Badry said. “Hiroshima were very organised but we had done our homework and I think we deserved to win.”

Chelsea, under pressure to lift the trophy in Japan after becoming the first holders to exit the Champions League at the group stage, face Monterrey in Yokohama a day later.

Elsayed Hamdi put the Egyptians ahead in the 15th minute, only for Hisato Sato to equalise with a fierce right-foot drive with snow falling heavily in Toyota.

J-League champions Hiroshima lost goalkeeper Shusaku Nishikawa after three minutes, stretchered off with blood stains on his jersey after catching a knee in the face.

Ahly captain Hossam Ghaly was then carried off with a knee injury with conditions rapidly deteriorating to be replaced by Aboutrika, famous in his home country for scoring the goal that won Egypt the 2008 African Cup of Nations.

Save the date : African champions Ahly will face Brazil’s Corinthians, holders of the Libertadores Cup, in the tournament’s first semi-final on Wednesday.