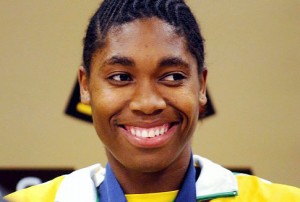 Mokgadi Caster Semenya is a South African middle-distance runner born on January 7 1991 in Pietersburg now Polokwane in South Africa.
She is as tall as 1.70 m and weighs 64 kg.
Journey
This South African athlete had been the greatest specialist in the 800 meters of her time. Her  appearance and voice, especially male, have ben debated: the IAAF made her undergo gender tests a few hours before the final in Berlin. She was withdrawn from international competition until 6 July 2010 when the IAAF cleared her to return to competition. In 2010, the British magazine New Statesman included Semenya in a list of “50 People That Matter 2010”.The athlete is intersex with unusual production of testosterone and a syndrome of androgen insensitivity. She ranks second in the 2012 Olympic Games of London.
Palmares

Caster Semenya is one of the nominees for Best sporting lady of the year. Vote for her here : http://www.africatopsports.com/africatopsports-awards-2012/