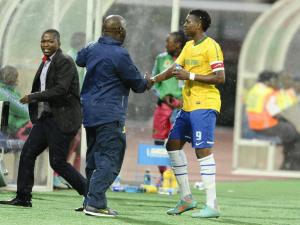 Mphela, who made his first league start of the season after recovering from a long-term injury, headed home a cross from Nyasha Mushekwi to hand the Brazilians a 1-0 victory over Black Leopards in Atteridgeville.

“I am happy that Katlego is back. I took a risk by including him,” said Mosimane, who picked up his first win in charge of the Chloorkop outfit.

“I took out Eleazar Rodgers, who scored for me at Free State Stars in our last match away, to put Katlego in.

“It’s good to have a little bit of competition, but I’ve always said that Katlego is quality. We all know the story of Mphela.”

Mosimane was encouraged by his new side’s progress, after the Brazilians picked up only their third league win in 14 games, rising to 13th in the standings as they pulled clear of the relegation zone.

Downs drew 1-1 against Free State Stars in Mosimane’s first game in charge earlier in the week.

“It was a little difficult at the end. Black Leopards are a good team and they gave us trouble today,” Mosimane said.

“We’ll take one step at a time. The team is still nervous, but if you compare our last match against Free State Stars to this one, we have put together four or five passes.

“I am stabilising the team first. I wish I had more time with the team because I’ve only had three training sessions with them.”

Having conceded a goal in every previous league game this season, Mosimane believed his charges would continue to climb the Premiership standings if they improved their defensive showing.

“It’s coming slowly, but the main thing is to keep a clean sheet at the back, both away and at home,” he said.

“So if we keep a clean sheet, we are able to come up with wins, but we want to slowly and gradually move up the log.”

In Sunday’s other games, Free State Stars edged Bloemfontein Celtic 1-0 in their derby clash in Phuthaditjhaba, while Wits were held to a 1-1 draw by AmaZulu in Durban.