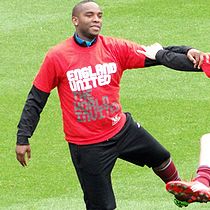 Orlando Pirates coach Roger de Sa believes it is only a matter of time before veteran striker Benni McCarthy starts banging in crucial goals for the defending League champions.

McCarthy, who came on as a second half substitute for Zambian forward Collins Mbesuma in the 1-1 Soweto Derby draw with Kaizer Chiefs on Saturday, made some deft touches before failing to convert at least two scoring opportunities that came his way.

De Sa, whose side is still three points behind Chiefs on the log standings, tells KickOff.com that Bafana Bafana’s leading scorer is becoming sharper and will play a key part in the Pirates attack during the second half of the season.

“I am happy that he [McCarthy] got more scoring opportunities than Mbesuma, despite the fact that he came on late in the second half. Benni is certainly regaining his fitness, he is a key component of our team,” De Sa tells KickOff.com.

“Besides his scoring abilities, he has a lot of experience. He can hold the ball well and creates opportunities for other players. He is a player whose mere presence on the field inspires the whole team.

“Obviously at this stage he is not yet at the same level he was before he got injured. But I believe with time he will become sharper.”