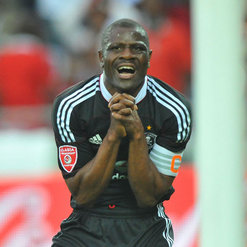 Lucky Lekgwathi admits he was disappointed to see Orlando Pirates not come away from the Soweto derby with all three points following the 1-1 draw against Kaizer Chiefs.

The result left the Buccaneers trailing their bitter rivals and PSL leaders Chiefs by three points, while also allowing Platinum Stars to go level on points in second place.

Speaking after the encounter, Pirates captain Lekgwathi told his club’s official website: “You have to understand that we needed this match more than anybody else.

“We were playing at home and I think we had the game under control in some stages but unfortunately we failed to score more goals.”

He added: “Overall, both teams created a lot of chances but since we got our goal first I’m disappointed that we were unable to keep our lead.

“The supporters will probably be okay with that (draw) because we did not lose the game and no supporters will have more bragging rights than the others going into Christmas, so, from that perspective I guess they could be happy but for me, I think we could have done a little more.

“The game is now gone and we will look forward to the next match. It is a must win for us and we will do all we can to win that match.”