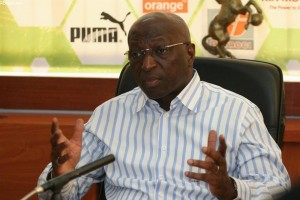 This is a “No”! The Confederation of African Football has rejected on Monday the application of the Ivorian Jacques Anouma.

This comes from the ordinary congress of the institution held at the headquarters in Cairo in Egypt.
This rejection is undoubtedly the corollary of the Raouraoua amendment adopted on 3 September. If the group Anouma argued that this project did not touch in any way the application of the former President of the IFF, it is clear that no.
With the rejection of Anouma’s application, the Cameroonian Issa Hayatou is likely to handle one more time a mandate. Though he has been leading the confederation since 1988.

A number of African observers say that the incumbent president Issa Hayatou, who has held the post since 1988, was behind the amendment in order to hinder strong candidates, like Anouma, from running.
The election will be held hold next March in Morocco.
Jacques Anouma is therefore going to contest such a decision of the Court of Arbitration for Sports (CAS) seemingly corrupt.