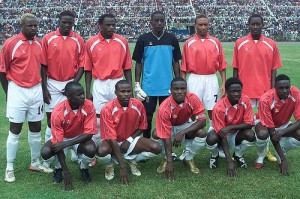 The Kenya national team, following a three-day break, have returned to camp ahead of their African Nations Championship (CHAN) qualifying clash with Burundi in Bujumbura.

Esakwa also revealed that the team will lay out a plan to hold training sessions at the Nairobi City Stadium so that the players can get used to playing on an artificial surface, as the venue for their upcoming match, the Port Louis Stadium, sports a synthetic pitch.

“The team is back in camp after the short break and it will be camping at the MISC, Kasarani for the match on Sunday. As a federation we want the team to prepare well for the game and we are not expecting any hitch. We also advised the coach that he should consider taking some sessions to the City Stadium so the players get used to the artificial turf,” said Esakwa.

“The team’s travel plans are also almost complete. They may travel on Thursday night (tomorrow) to be able to
adapt to the weather conditions there.”

The final team that will travel to Burundi for the game could be named today. The game is scheduled to kick off at 1530hrs.