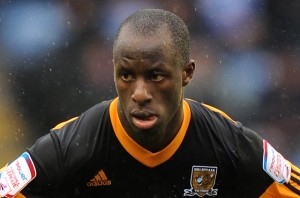 Nigeria international, Sone Aluko may have his African Nations Cup in South Africa dream shattered following the news that he may be sidelined for between two and three weeks as the Tigers seek to put an end to his troublesome Achilles problem, report the Derby Telegraph.

Aluko has missed the last two games and has now had an injection to help clear up the problem, with manager Steve Bruce hoping a period of complete rest will aid the recovery process for City’s leading goalscorer.

“Sone trained on Thursday and unfortunately was sore on Friday,” said Bruce.

“He had an injection on Friday and we’re hoping that now he’s got five or six days off doing absolutely nothing, in two to three weeks it will have done the trick and we’ll see Sone back again.

“We’ve played two games away from home without arguably our best player of the season and we’re hoping it’s not a bad one. The worry is that it’s the tendon, but the scan has revealed that there is no real damage. We’ve put an injection in to try and release it.”