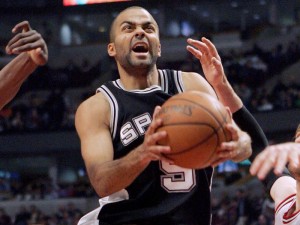 Tony Parker was the architect of the victory of the Spurs in Houston Monday night in the NBA. Author of 27 pts, 12 reb, 12 ast, the French leader has greatly contributed to the success of the Spurs on the floor of the Rockets last night (126-134). Tony Parker has just made his first triple-double of his career.
“Tony Parker has allowed us to stay in the game. He was magnificent in defense as in attack, “acknowledged Gregg Popovich, San Antonio coach. Tony Parker had to get out the big game against Jeremy Lin.

Victory against Houston has been slow to emerge and even failed escape San Antonio, led by three points (116-113) in three minutes from the end.

In front, the leader of Rockets Jeremy Lin is on fire with 38 points. Ably assisted by Gary Neal (29 pts) and Manu Ginobili (22 pts) while Tim Duncan was discreet (10 points, 1 to 10 shots), Tony Parker manages to pull the extension and finally knocked Houston down.
Read also:
http://en.africatopsports.com/2012/12/06/tony-parker-pop-gave-me-a-challenge/