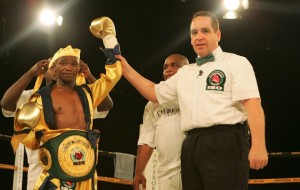 “I did not think the end of the fight was going to happen so quickly, but I knew I was going to knockout. I tried to fight, but the guy in front was not combative. “

However the Argentine boxer possesses a rich track record with 19 wins, 18 by KO in 21 fights and only one defeat. For his part, Nkosinathi Joyi signs his 23rd victory in 25 fights.