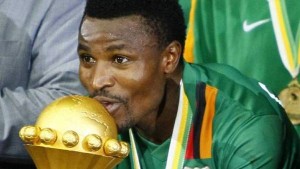 As announced, the BBC has announced the winner of the trophy rewarding the Best BBC African Footballer of the year.

This is Zambia’s Christopher Katongo who has been designated by thousands of voters around the world. African champion in 2012 with the Chipolopolo, Katongo has become the symbol of this surprising team during in Gabon and Equatorial Guinea. Katongo was competing with the Ivorian Drogba and Toure, the Senegalese Demba Ba and the Moroccan Belhanda.

Christopher Katongo has evolved with Jomo Cosmos in South Africa from 2004 to 2007 before filing his suitcases in Brondby, Denmark. Katongo wore then colors of Arminia Bielefeld in the Bundesliga in 2008.

He left Germany in 2010 for Skoda Xanthi in the Greek league.

Since 2011, he is an associate of the Chinese club Henan Construction.