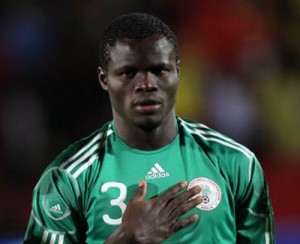 The left lateral of the Dynamo Kiev, Taye Taiwo hopes to be part of the Super Eagles for the 29th African Cup of Nations.

On BBC, the former defender of Olympique de Marseille is actually back to the first step since he left Milan AC.
The latest convocation of the Nigerian international was on February during the victory against Rwanda (2-0).

He is actually looking forward to honor a new convocation by participating in his 4th Afcon “I player the tournament in 2006, 2008 and 2010. It will be a great honor for me represent one more time my country”.

At Dynamo Kiev in the form of loan, the 27 year defender has 27 caps for 5 purposes.
He will be included into the selection of Stephen Keshi at the end of December.
Read also:
http://en.africatopsports.com/2012/12/11/taye-taiwo-the-nigerian-visiting-marseille/