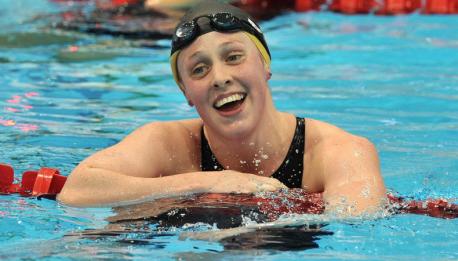 is a British and Scottish individual medley swimmer.
Hannah Miley won the first world title of her career with 400m Individual Medley gold on the opening day of the 2012 World Short Course Championships in Istanbul.

The Commonwealth champion qualified fastest for the final before breaking the Championship record, as well as her own European marker, to take gold in 4:23.14.

China’s Olympic champion Ye Shiwen crept up on to Miley’s feet in the final 100m Freestyle but the British kicked hard to take the title ahead of Ye (4:23.33) and Hungary’s Katinka Hosszu (4:25.95).

Miley admitted she was delighted to have bettered her time from France en route to her first world crown.

“The fact that I went faster than at Europeans is a massive bonus because that time was a really big surprise and I was worried I wouldn’t be able to repeat it here,” said Miley.

“I knew Ye Shiwen was going to come back on me in that last 100m so I was just hanging on for dear life.
“It’s a big confidence boost that no matter where we are in the programme, I can step up in the 400m IM and what we’re doing at the moment really seems to be working.”

Jemma Lowe reached the podium for the third consecutive World Short Course Championships, stealing in for 200m Butterfly bronze from an outside lane.

“I am really happy,” said Lowe, who qualified seventh fastest for the final despite winning her heat

“I was in a really slow heat in the morning, so I did not really know what to expect for this final.”

“It made it difficult that I was in the outside lane, so I could not see how fast the others were swimming. But it is a final, so you always have to give your best shot.”

Miley returned to the pool later in the session, teaming up with Rebecca Turner, Sophie Allen and Jazz Carlin to finish fifth in the 4x200m Freestyle Relay in 7:45.85