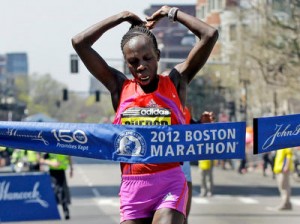 Kenyans dominated the quasi-distance and middle distance races in the world this year. They would probably return it in 2013.

In turn, ensures Sharon Cherop that she will come to Boston to “try to win again and figure (her) best level.” She added: “I know that some of the best athletes in the world will also be there in 2013, but I’m ready for this great race.”

In 2012, they were imperative, Wesley Korir with men and Sharop Cherop with women. The news was announced by the organizer of the marathon, the American manager, Tom Grilk. It is worth noting that the best performance of Wesley Korir (30) on the distance was 2h 06’13 “made in Chicago last October, while Sharop Cherop (28 years) has already raced in 2h 22’39” in Dubai.