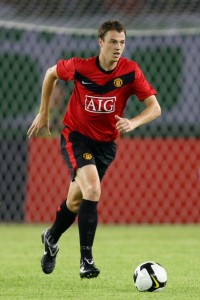 The 24-year-old came through the Red Devils youth academy before making his first-team debut in 2007, and has since gone on to make 141 appearances for Sir Alex Ferguson’s side.

“I am so proud to play for such a great club, and there’s no better feeling than playing football in this team and winning games.

“I have always felt that this is the right club for me. Even when I was nine or 10 years old back home in Northern Ireland, clubs asked me to go on trial but I didn’t go because I knew that Manchester United was the place I wanted to play football.

“I have come through the Academy here and developed as a player with the help of all my team-mates, the manager and the coaching staff. I would love to play here throughout the rest of my career.”

United boss Ferguson said: “Jonny has risen through the ranks to become an integral part of the first-team squad.

“He has developed into a top player for us and has scored a couple of important goals this season too. I am delighted he has signed a new contract.”