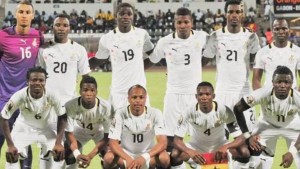 Ex-Ghana international Ibrahim Sunday believes the Black Stars can beat any side at the 2013 Africa Cup of Nations but stressed on adequate preparations.Ghana will be making its latest attempt to end a 31-year trophy drought next year in South Africa.The Black Stars however need to come out of a group which includes Mali, Niger and Congo DR.

And though the Nations Cup winner himself recognizes there are no minnows in the modern game, Sunday is confident Ghana can win the title provided it prepares well and gathers enough information on the other competing teams.

“It is not bad (referring to Ghana’s group), I believe it is a group we can sail through with a little bit of effort and good planning,” he told Melody FM, Ghana.

“Today you cannot say a team is cheap. This is the second time consecutively for instance that Niger has qualified for the Nations Cup and therefore will be a force to reckon with.

“DR Congo we know are a good side that can play very good football.

“Mali in the last Nations Cup, we beat them at the group stage and they beat us later and so it is not going to be very easy for us.

“There are so many types of preparations; the coach having his players on time, playing some few friendly matches and also we need to know more about our opponents very well.

“Not information about only the favourites but then all the other teams so that we can plan well for the tournament as a whole.”

Ghana is in Group B which will be based in Port Elizabeth and opens its group account against Cong DR on January 20 before subsequently taking on Mali and Niger.

Sunday started his career playing for local club Kumasi Asante Kotoko, of which he became the captain. In 1970, he and his club won the African Cup of Nations, predecessor of the CAF champions League, the first international title obtained by the club. A midfielder, he played the majority of his career for Ghanaian club Asante Kotoko, and was also a member of the Ghana National Team, participating in two Africa Nations Cup tournaments. In 1971, he won the Afica  award. In 1975, Sunday moved to Werder Bremen,in the German Bundesliga, where in two seasons he barely had any playing time, appearing in only one league match against Rot – Web Essen in December 1976.