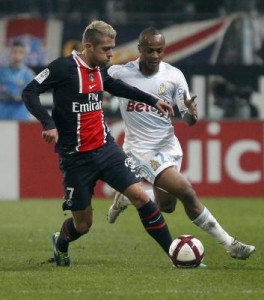 Andre Ayew scored with a towering header in first-half stoppage time as Marseille beat Saint-Etienne 1-0 at home on Sunday to head into the winter break level on points with leader Paris Saint-Germain and second-place Lyon.

The French title race is the closest among the top five leagues in Europe, with only goal difference giving PSG the edge over Lyon and third-place Marseille after 19 matches. PSG, which won 3-0 at Brest on Friday, is ahead of Lyon on goal difference. Lyon beat Nice 3-0 on Saturday.

Marseille has won its past three league games, while Saint-Etienne has failed to win and score a goal in its past six.

“For the last few games we’ve been hanging on after scoring first,” said Marseille coach Elie Baup. “But there’s no doubting the unity we have in this team. Everyone pulls together.”

At the end of a scrappy first half, right back Rod Fanni burst forward and whipped in a superb cross toward the penalty spot, and Ayew climbed above his marker to send a powerful glancing header past goalkeeper Stephane Ruffier.

“I think we have the quality and the players to do something good this season,” said Ayew.

“But we shouldn’t get carried away. When we win it’s always either 1-0 or 2-0, and we’re never really safe from the threat of a late goal. We need to start killing teams off.”

Baup agrees that Marseille needs to strengthen in attack during the January transfer window.

“That’s the area we are struggling the most in and where we need to improve,” said Baup, adding that he is aiming to sign two players.

In the second half, Saint-Etienne missed chances as midfielder Joshua Guilavogui saw his shot charged down by goalkeeper Steve Mandanda, who then did brilliantly to tip Pierre-Emerick Aubameyang’s header over the crossbar.

Saint-Etienne’s goal slump has coincided with that of Aubameyang, who has not scored in seven games since being linked to some of Europe’s big clubs.

Meanwhile, Valenciennes goes into the annual break in sixth place after bouncing back from two defeats to beat struggling Evian 2-1.