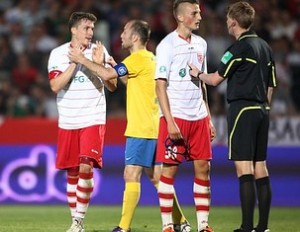 FC Kaiserslautern moved up to third in the Bundesliga 2 standings with a slender 2-1 win at tenth-placed VfL Bochum on Thursday night.

Konstantinos Fortounis and Mohamadou Idrissou netted either side of the break as Kaiserslautern made it three wins from three on the road, despite a late strike from Bochum’s Yuseke Tasaka.

The Red Devils crafted the first opening of note after 14 minutes when Idrissou poked wide from Fortounis’ pass. The game opened up from thereon in as Fortounis and Tasaka chanced their arm from range. Idrissou’s movement was causing problems for the hosts, with the striker sending a downward header straight at Andreas Luthe.

The visitors’ persistence paid off, though, as Fortounis powered home a pinpoint cross from Florian Dick to put his side ahead after 35 minutes. Alexander Iashvili was Bochum’s most effective outlet, if only in fits and starts, and it was his stinging drive that forced visiting keeper Tobias Sippel into action nine minutes before half time.

Only a flying Sippel save denied Tasaka’s curling free kick shortly after the restart, before an irate Iashvili saw vociferous penalty shouts waved away by referee Harm Osmers. Kaiserslautern’s Ilijan Micanski then took a tumble following a jinking run into the Bochum area as the visitors looked to reassert their authority on the contest.

Iashvili continued his ad hoc torment of the Kaiserslautern full-backs, only for Idrissou to pop up at the other end with his fourth of the campaign, poking home with the aid of the crossbar for 2-0. Tasaka’s emphatic 83rd-minute strike reduced the arrears, but failed to spark the grandstand finish the home fans sought.